Today its a fragment, hopefully the fragments will join together into the greater scheme of things of a circular walk. Last year I completed two more segments of this stretch. That was a solo trek, this time I have a guest hiker, John Elliott, who joined me on a Morecambe Bay walk in July. We are on holiday in St Davids so want to tackle part of the Pembrokeshire Coastal Path.

First thing it is pouring down, that relentless drizzle that is calculated to reduce the human soul to misery that Wales so specialises in. However, by 10am it has stopped and we are driven by Julia, Mrs R , and able assistant granddaughter,  Gracie Elliott,  to our start point. John has already complained that my rules mean we should start where I completed my previous trek, ie at the bottom of the hill, rather than the top. However, I point out he is younger and fitter and should not be fazed by such a requirement, still its a lot of steps and a steep climb to start our walk.

A quick selfie and we start, making good progress, I am reminded by the uneven steps why I never was attracted to walking the Inca trail.

It’s overcast, but fine walking weather, even if not beach weather, as Newgale shows being much more deserted than it was yesterday. This part of the country also gives me my first taste of vertiginous cliffs. The path is well marked, but I would not like to walk it in poor visibility or in howling gales.

It’s also a switchback as we climb and descend with the many coves. I had worried that I wouldn’t be fit enough to keep up with John as he recently completed the three peaks. However, he is either being kind, or I am fitter than I thought, and I have no trouble matching his pace. I do wish there were fewer steps though 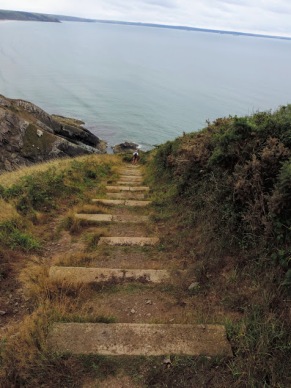 The views over the sea and towards tankers entering Milford Haven are stupendous, but the greenery is too, dew still rests on the heather, giving beautiful patterns.

The farmers do seem very territorial, and fences go right up to the cliff edge to divide fields. I don’t think I would like to take fencing up as a career in this part of the country,

This one did go further towards the cliff edge, but I decided not to investigate any closer to it. As we proceed the path becomes easier, and spotting a horse trough by the side of us, we ponder whether we are on a bridlepath, and are greeted by wild ponies who are quite used to human visitors.

We near Solva, and there is one more climb to get over (which is the worse of the day, because it is not only steep but also very narrow and winding) However, the view of Solva harbour repays the effort of that hill

Solva was once a port of embarkation for New York. Today it is hosting a childrens regatta, but looking at the size of the harbour, it must have been an uncomfortable and cramped journey across the Atlantic. In the 1800s it was a centre of lime production – kilns can be seen on the harbour, the construction date is unknown but they are mentioned as early as 1811. The harbour was also used as the setting for The Reverend Eli Jenkins home of Bethedsa in the 1971 film of Under MilkWood. Richard Jenkins and Peter O’Toole were often seen in the area (Llareggub was set in Fishguard) however, the inhabitants were not lucky enough to have Elizabeth Taylor grace them with her presence, despite her husband being overheard berating her on the phone to “get your fat arse down to Pembrokeshire”

We sit on the harbour and rest for our lunch. 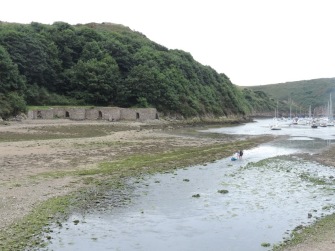 Refreshed we start to climb the path on the otherside, passing a curiously knitted signpost. I can’t say that these are reliable, as they took us in a circle, meaning we had to climb twice.

Apparently , it has been yarnbombed. The afternoon is a much easier walk, as the path evens out as we descend towards St Davids. My daughter bought me a Nicholas Crane’s Great British Journeys, which I was by total happenstance reading about Gerald of Wales and his journey to garner support for the Crusades. He describes this area as one inhabited by men who want to live as far away as possible away from worldly upsets, adding that there are no woods, rivers and no pasture, and that the soil is rocky and barren and the peninsula exposed to the wind and inclement weather. Not a place to visit in adverse conditions then.

We see our campsite in the distance (Nine Wells, so named as it was the last watering place before St Davids) 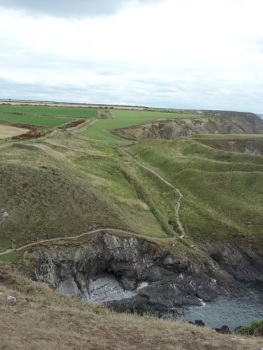 However, the end of our journey is now in site, and John is gasping for a pint, so we leave the path at Caerfai bay 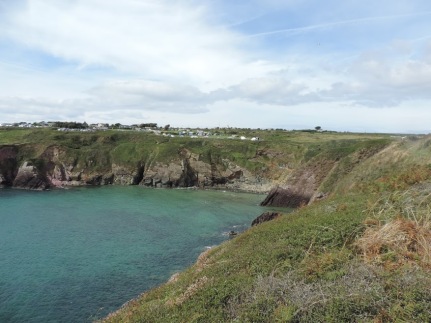 and after trekking the length of St Davids we stop in the Farmers Arms for a well deserved drink (I wouldn’t mind he insisted on the Farmers, passing several suitable ones en route) before asking the support team to transport us back 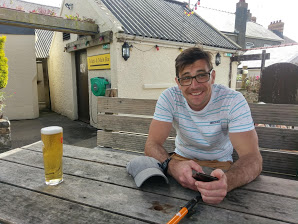 Copyright 2018 Allan Russell, except where indicated.