Day 4 and The Mersey and the Manchester Ship Canal are one. I join them and walk to Warrington

It’s a Sunday and I catch the tram to Eccles, jump on a bus and am back to start my trek. Even though we are in early October there is still residual autumnal sunshine and it’s a relatively warm day. The scenery isn’t up to much though, as I am wandering through what was once thriving Manchester docklands. It is still a working docks but not as much as it once was. There are plans to revive this though and bring cargo once more up the canal from Liverpool  to save congestion on the roads. However industry is still mingling with decay 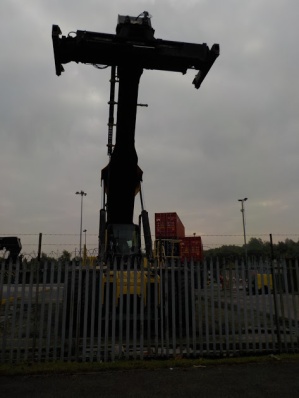 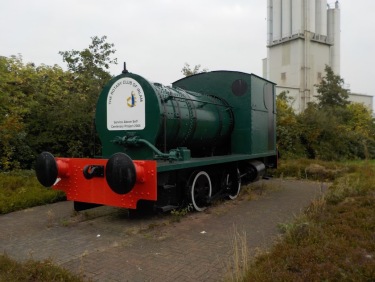 I havent been able to find much information about the rivers before the canal  and one thing I would love to know is what their original course was, whether they joined or flowed apart. However, you can see some of the original flow of the Irwell along the route. Here it leaves the canal and goes off in an ox bow.

There is more of the original route to be seen on the other side of the canal apparently, however , that is not accessible for me. The scenery even becomes pastoral in places

Today’s route is easy and I rarely lose sight of the canal, even though I seem to be wandering through deep undergrowth at times. That and signs warning against smoking on the canal, for risk of igniting petroleum remind you the canal isn’t a safe place. There are stories about it catching fire in the past. How people swim in it these days is a little beyond me.

It’s at Warburton Bridge that I make my mistake. I assume that the existence of a path, and the marking of a bridge across the Mersey where it leaves the canal mean all is well for my onward path, more fool me. Anyway for now, Warburton Bridge is a fine structure. It is a toll bridge (although the toll is only 12p) and it is the only route across the canal between the M62 and the M6. 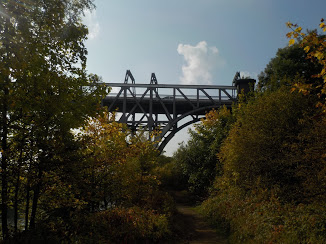 Despite the fact I am now unknowingly going down a dead end path, the canal is positively peaceful and its hard to imagine that once it was populated by heavy canal traffic

Still, the path starts getting narrower, and the trees start overhanging, I pass a tree that someone obviously lives in (it is draped with tarpaulins and has evidence of cooking),  but don’t hang around to chat to them, after all if they live in a tree on the edge of the canal they may not be friendly to the likes of me.

I also pass weird plants, almost triffid like. This is an unsettling part of the canal. I can hear trail bikes in the distance They seem to be approaching me , tyre tracks on the path give weight to that hunch.

It is now very dense and the trees are all around me. I can see the Mersey leaving the canal ahead of me, and the bridge. However a tall fence tells me that I can’t go that way and have to turn back. This is my first, but by no means my last dead end on these walks, I will just have to get used to it. It is about a mile back to a path, and I manage to cross a field (probably trespassing) to a holiday camp site (no me neither)

It’s a walk along the main road until I can join the Mersey again, and when I do the river has returned to its meandering self, that I walked a few days ago. It isn’t totally easy going as I have to leap some dykes, however, I reach the M6 which seems as good a place as any to seek out a bus stop to find my way back home.