It’s a drizzly morning as I arrive at Fidlers Ferry once more. The river is high

I can’t follow the river at this point, so it’s back onto the canal, which becomes navigable at this point (there is a branch out to the river) although some of the boats seem to have given up the ghost.

It’s easy going today, the towpath shadows the course of the river and I catch glimpses of it through hedges.

The canal passes Fiddlers Ferry power station which looks ominous in the low cloud. It is rather monotonous walking past here, as it is visible from long away – you can see it from the Peak District – I spotted it from the top of Goyt Valley last week. I don’t know why but the place seems to be spelt with one “D”, but the power station with 2 “D”s

The cranes constructing the Mersey Gateway bridge are visible as well, but shrouded also in low cloud. The works divert me off the path into the centre of Widnes.

I have never been to Widnes before, always thinking it a dull Mersey suburb town, however, the centre is very attractive. I pass an old ICI building.

I’m only putting this up, because I did a lot of work for ICI Organics in the early 1980s and this building has been demolished for the Gateway works when I return down this path in 14 months time. The top if you can see it is inscribed “ICI General Chemicals”. The building served as the research laboratory, and is commemorated by a blue plaque at the Catalyst Museum in the centre.

In the centre , the canal reaches the Mersey, and makes for a fine vista over the sweeping river and railway bridge. It’s really much nicer than I expected it to be. I reach Runcorn on the other side in about 18 months and I can’t say the same for that place. 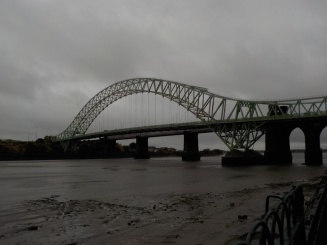 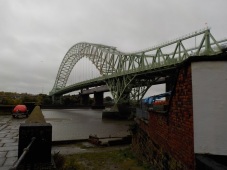 A walk through the old town gives equal rewards. Widnes has long relied on the Chemical Industry – the first factory was built there in 1847, it continues to be a major employer, and Catalyst, the only science museum in the UK devoted to Chemistry is based here.

Past the bridge the path continues towards Liverpool. I have a chat with a local remarking how impressive the whole area is around the river. He concurs but with a caveat. I am shortly to pass a pig rendering plant, and will know as soon as I approach by the smell

Still, the muddy estuary and bridges over culverts and tributaries makes for nice photographs.

From here to Hale, I cover ground quickly, and can tell by low flying airplanes that I am near John Lennon International (or Pete Best airport as it used to be called). At Hale I make a note of my bus stop and return to Warrington via Liverpool (well it’s easier !)