Fine weather is forecast today, but that doesn’t stop me having to deice the car before setting off for the train. Given the distances and the complexities of the rail fares system, it takes a bit to work out the most favourable fares, and split tickets, but I get a decent deal, and that’s sweetened by my newly acquired senior railcard.

The weather at Brough is glorious, and the route takes me out into the town, which looks pleasant, I have only ever sped through it before, but it was obviously a ferryport to cross the Humber at some point. It was also the residence of Dick Turpin until 1739, and a Roman settlement at the southern end of the road from Newcastle.

However, the foray into town is brief and the route doubles back to the river where I left it last time. I do like the satnav I have, but it does have a tendency to steer you on a footpath, and I descend the steps (which are being repaired) back to the path I left on Saturday, only to be guided back onto the road 25 metres further down. I might as well have saved my knees and stayed on the road. Still, this time, I am right next to the Humber and it is going to be my companion for most of the day. 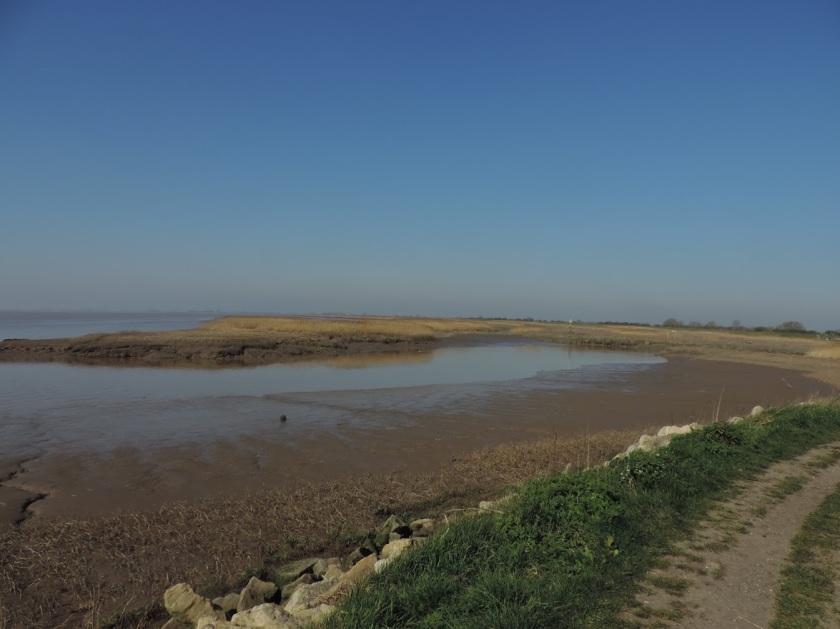 Infact, they have made use of the floodplains, and on this stretch there is even a boat club, Welton Water,  on my land side, so I have water on either side as I make my way towards the Humber bridge gimmering in the distance. At North Ferriby, a diversion is marked because of a rail bridge under repair, but I ignore it as my route is not inland, I soon discover that the fates are against me at this point, as my route follows the low tide route, and of course it is high tide, and the path ends abruptly at some rocks.

So I have to follow the High tide route, and guess what the bridge over the railway now comes into play, so I can’t get that, and just as I am resigning myself to retracing my footsteps (the Satnav is already whining that my route is 1.1 miles behind me, it has been announcing steadily every 100 yards I go off route) I ask one of the workmen how far it is back to the preceding bridge, and he takes pity on me and opens up the way.

That gives me a chance to see North Ferriby, which looks very affluent and is full of old and new manorial houses. Quite a pleasant, if pricey place to live.

The diversion has cost me nearly three extra miles (all for about 200 metres of private gardens which overlook the river).

Getting back onto the river path my heart again sinks with another diversion posted on the gate which involves me walking back one mile to the main road in North Ferriby and along to the Humber Bridge following the main road, fortunately , a local comes to my rescue telling me that the route has been reopened this morning, so I can proceed safely, without fear of further diversions, for now.

The bridge is now getting nearer,  the bridge itself was a bribe by Harold Wilson to win a by election in Hull North in 1966, but not completed until 1981. I remember seeing it soon after it was built, when visiting some friends in Scunthorpe. It remains a thing of beauty, as well as cutting 50 miles off the distance between Hull and Grimsby. It is going to serve me as well as a short cut when I start walking the Lincoln coast. John Merrill, when he did his round Britain coastal walk in the 1970s reckoned that the diversion up and down the Humber was 120 miles (and he cheated by traversing the Goole railway bridge). 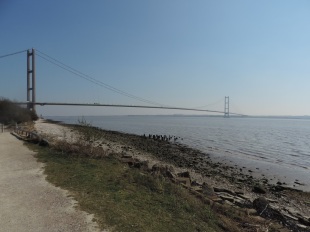 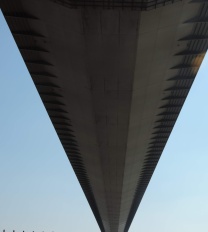 Amazingly in 2005, Graham Boanas walked across this river at low tide, making him the first person to make such a crossing since Roman times. He had to lose 3 stone to do this, and it did help that he stands 6 feet nine inches, it is still an amazing achievement. The fact that two lifeboats were out as I walked along the river, only emphasises what a dangerous place it is. 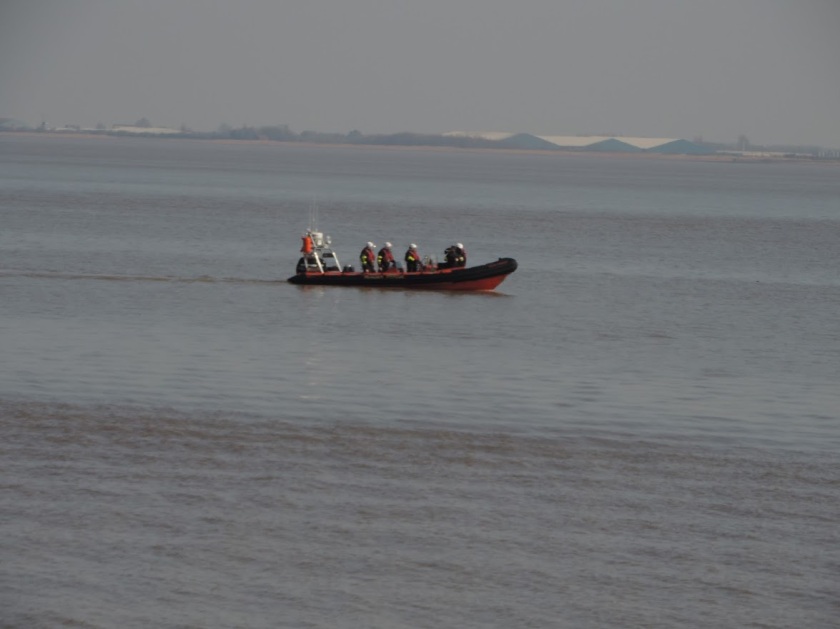 There followed a two mile stretch where river, path, road and railway run parallel, which was not such a pleasant experience, especially with the path being narrow, and close to the main road, for much of the stretch.

Hull was and still is a major seaport, and there are many memorials along the river for lost sailors and ships, perhaps the most impressive being this one.

It stands somewhat incongrously infront of a retail park, and a little upstream from John Precotts favourite Chinese Restaurant, Mr Chu. I didn’t get a great picture of that one, so I will spare you that.

Entering the docks proper, there is now quite a bit of decay even worse than I remember in Liverpool, which has regenerated much of its dockland. Perhaps time will improve the devastation here, but for now, it provided a contrast from the barren fenland of my past couple of days walking. 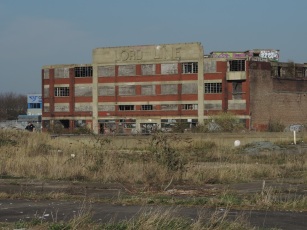 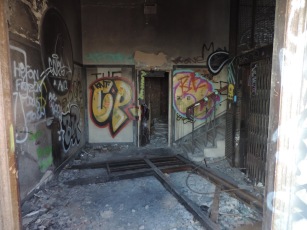 However, further downstream there was evidence of still functioning industry with a ship repairers with a Polar Surveyor in dock.

And the centre of Hull is certainly prosperous with a marina and bars as well as many fine buildings. 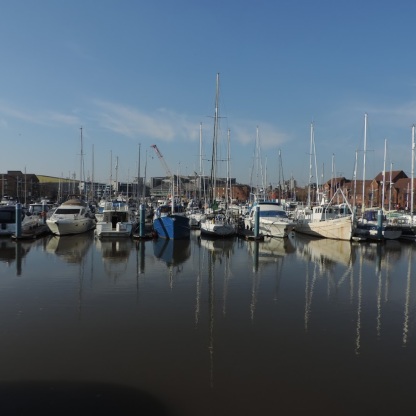 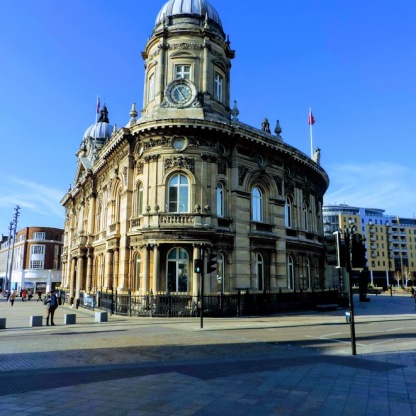 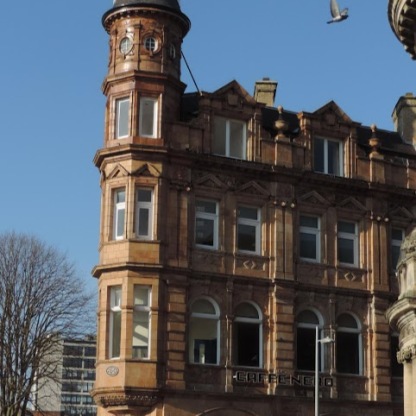 The most poignant sight was the memorial to the Hull Blitz, more bombs dropped on Hull than any other town in England. This notes the name of every person killed and date they died. It stands near the site of the Prudential Assurance company, where over 200 people were killed in a bombing raid. Nobody knows the true number as the bodies were covered in lime.

Paragon station always reminds me of Manchester Victoria, but they were built by different architects for different rail companies, so that kills that theory off.

Trans Pennine threw one last spanner into the works by cancelling my train back , but Northern came to the rescue with an excellent express service to Doncaster and Sheffield, which allowed me my last tick in the box by passsing through Goole. I have now been to every place listed on the signage outside Manchester Victoria station.

With the three mile detour, I walked 15 miles today, chuffed with that.