Last October I finished at Bowness On Solway at the start of Hadrian’s Wall. The intention was to walk the wall at some point, and I arrived today with a companion, Keith an old school friend to start the trek. We are staying overnight in Carlisle, so this is another innovation for me, having company and not managing with day trips.

It’s a long taxi ride out to Bowness, the countryside becomes more remote as we go along, and for most of the journey we are previewing our route back. At Bowness, we take a selfie at the entrance to the path.

It’s a much nicer sunnier day than last October, with clear views over to Scotland.

The water of the Solway Firth isn’t deep, and if you know the sands, it is possible to walk across at low tide to Scotland. Haaf net fishing is a traditional craft on the water, and the fishermen often do this to get the better fish on the Scottish side.

There was a railway built in 1869 that crossed the estuary, an extension of the Maryport and Carlisle railway just a bit further towards the sea, but that was damaged by ice in 1871 and 1881 it was repaired, but closed to passenger traffic in 1914 and freight in 1921. Scots in Annan still saw the attraction of Bowness on Solway as a source of Ale on dry Sundays so walked the bridge on the Sabbath until it was finally demolished in 1934 as too many people were not reaching the other side, and perishing in the waters of the Solway Firth as they drunkenly made their way back home after a session.

The remains of the railway crossing – Copyright Simon Leddingham

Of course the shallow waters and surrounding low land do mean flood risks.

We met an enterprising signwriter just before Port Carlisle. He makes the signs to order. Appartently this is the only time we will see it dated 12 July 2019.

Just a little bit further down is the coal dock for Port Carlisle. This was used to deliver coal to Carlisle from Liverpool. The canal was built in 1823, a barge would be towed to the city in one hour forty minutes, meaning coal could arrive from Liverpool within a day.  The barges used the return journey to deliver biscuits from Carrs and McVities in Carlisle. However, the railway soon superceded it, and the canal was drained in 1853, having lasted just thirty years. As final insults the railway viaduct altered the flow of the river, causing the port to silt up, and part of the canal bed was used for the railway. The old canal bed follows the route of the wall, and can be seen from the path, heavily overgrown. 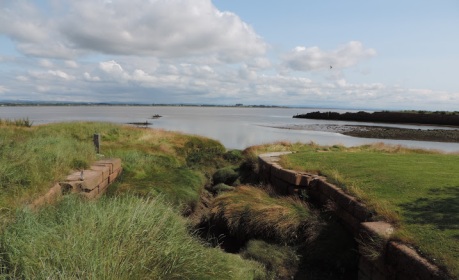 The estuary is serene here.

at Glasson we stopped for a break outside the Highland Laddie inn, unfortunatly up for sale.

I saw many butterflies along the route, these two decided to pose for me.

Next stop was Drumburgh, with Lowther house, which apparently once sold spirituous liquors.

Not at all short of interest this route, next along was Drumburgh castle, which originated in a pele tower, dating from 1307. Pele towers were free standing fortified buildings designed to protect the inhabitants from marauding Scot invaders and cattle rustlers. The animals would go on the ground floor, and the first floor was heavily defended, the stone used to build this came from the wall, as is the case of many of the buildings along this route. 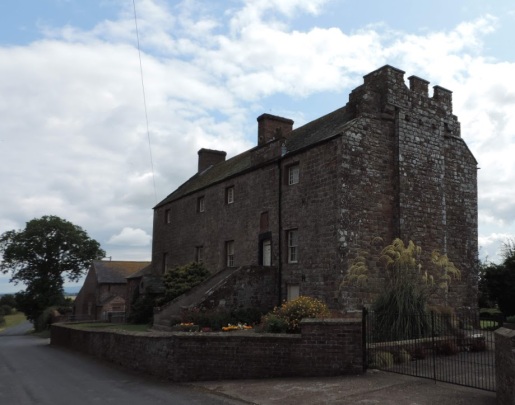 Following that it was a long walk along the course of the wall, and now a dyke to protect the low lying land (see sign above re water levels at high tide) and into Burgh by Sands. It was on the Solway Firth at Burgh by Sands on 7 July 1307 that Edward I died (of dysentry not in battle) and it is marked by a monument on the water, and a statue in the village itself. He had journeyed there from Lanercost Abbey (our eventual destination on this stage of the wall) where he and his retinue had stayed for six months, nearly bankrupting the abbey in the process.

He lay in state at St Michael until his family came from London to take him back to Westminster Abbey for burial. It is said that as he was dying he gathered his closest aides around him to ask that his son Edward II should be looked after and Piers Gaveston, the younger Edward’s lover, not be allowed to return from exile, which instruction Edward II immediately overruled on ascending the throne. Quite impressively for the time, Edward I was 69 when he died, and was 6′ 2″ tall. 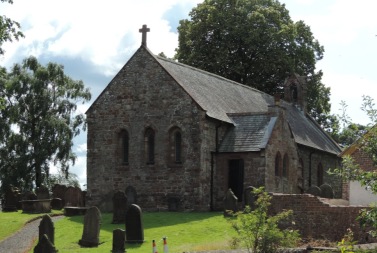 The tower is fortified and the church is built of stone taken from the wall.

After Burgh we trekked for what seemed ages though fields and over paths, missing a path once, being on tunnel vision (adding a dispiriting one and a half miles to our walk.)

Finally  we reached the outskirts of Carlisle and the River Eden.

By now we were getting tired, and what I had thought would be a leisurely riverside walk to end the day was decidedly not as we descended and climbed several vales and troughs as we went along the river, there were countless steps and bridges to accomodate the streams entering the Eden. Finally though we entered the centre of town, with a rather fine statue of Queen Victoria, and a very pleasant inner city park. 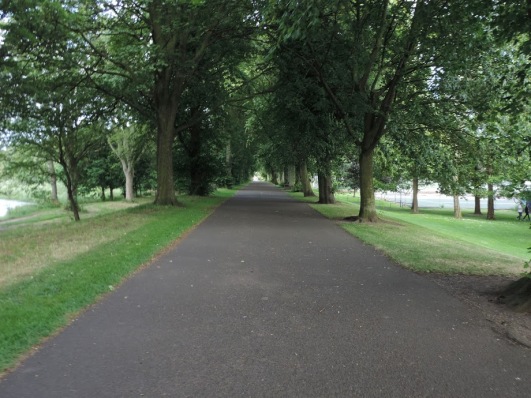 Then it was the town centre proper, and fittingly the first thing our eyes rested on as we started making our way to the B&B was Ristorante Adriano. Well we thought why not eat Pizza as the Romans quite clearly did not. Then, suitably filled (food was excellent) we made our way to Ashleigh House B&B, booked in, showered and crashed out. 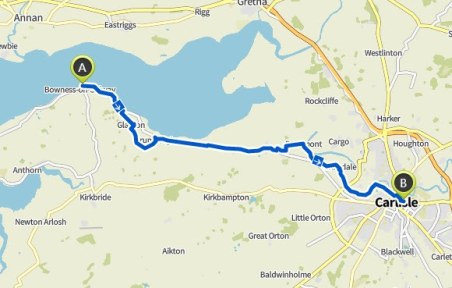