It’s a better journey out today as I get a direct train to Carlisle, then change and go south to Whitehaven.

Even better, the TPE arrives in Carlisle at 08:17, and I literally hop on to the Northern Service heading south at 08:18. That is what I call a connection.

The big kid in me has now done this entire line by train (that is Carnforth to Carlisle). A quick taxi ride at Whitehaven drops me in Parton. The driver offers to drop me off a bit earlier so I will get more coast in, but that involves doing a bit twice so I forgo.

It continally surprises me that the accents in this part of the country are near Geordie. The driver tells me that the past few days have been wet, but today it is not raining (even though ominous clouds hung Mordor like over the Lake District on the way up). It’s late summer though and I start in coolish weather, but the sun quickly heats up the day. A short climb out of the bay gives me a fine view of the coast and Whitehaven (much better than the miserable rain of St Bees head last week)

The path is also well defined here (infact it is a track , wide enough to take a cart, and reassuringly not as precipice like as last week). At the top of the cliffs , there is an old abandoned factory 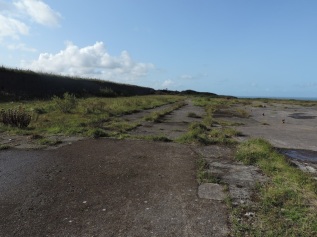 and Workington lies ahead beyond wind farms. 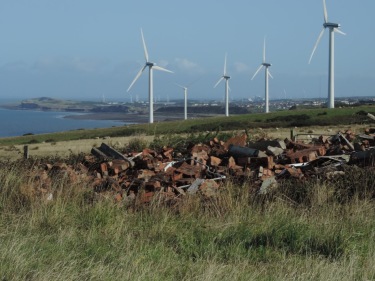 All in all there are some fine views to be had, the mood really does boost when the weather is good and I am positively enjoying what is really a light stroll.

The first village I pass is Harrington, a pretty little port, although there is not much water in the harbour

However, let’s fast forward – the picture above was taken around 10am, compare it with the same scene I passed scene I passed on the train back at 2:30 pm

The tide must come in very quickly as I passed Workington harbour at 12:30 and it was in similar dry condition, when I passed again at 2pm it was full. I only have the before picture for that one though.

I did like the flower garden boat on the quayside. I think it will give Mrs R ideas for our garden, so we will gloss over it. 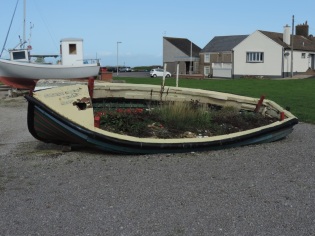 All in all , Harrington is a pretty little town

As I move along the coast there is more evidence of past industry – this looks like an abandoned railway spur, though I can’t work out where it would have gone. It may have collapsed into the sea at some point, and the line built further inland. This entire line hangs onto the coast and is just as vulnerable as Dawlish, however, not being in the fashionable south it doesn’t tend to get the headlines when the line is brought down by the waves. Infact in January 2014 the entire trackbed was washed away at Flimby – one month before the Dawlish line collapsed, leaving the tracks hanging in mid air. It took just one week restore it.  Shap quarry was specially opened to supply ballast. 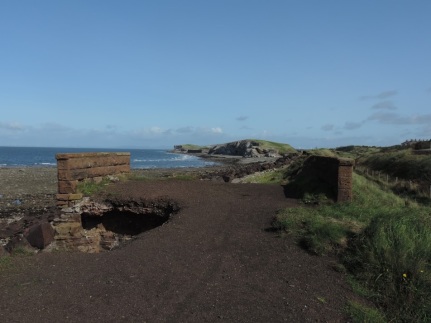 And as you can see, its an ongoing job

I do like the closeness of the sea and the line, it makes for interesting pictures 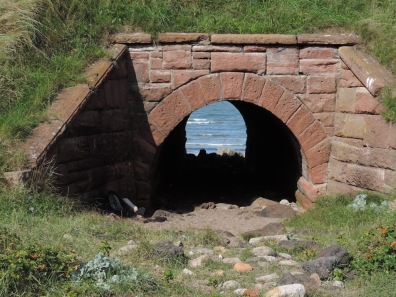 There are also some tank traps, and lookout turrets dating from the second world war, when this coast was under threat of invasion, although I must say the tank traps are not as aesthetically pleasing as the ones on the Northumbrian coast, more dark and oppressive than the light concrete ones in Northumberland. I stand corrected these are not tank traps but impurities taken from the bottom of blast furnaces. and used as breakwaters. Apparently much of this coastline is man made, the cliffs ahead are slag heaps. 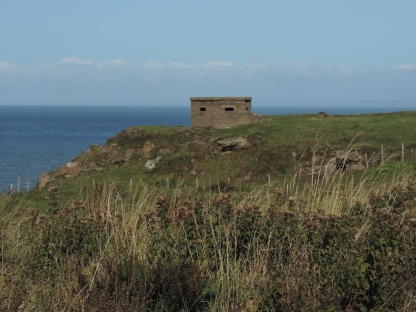 After walking along the path a while I am soon in Workington, and although well marked , the coastal route is very urban, stuck between a trading estate and the metal railings of the railway line. Workington Station is the only sight of interest on this route. I did spot a strange sign on the platform, reminding people not to use the toilet when the train was standing at the station. Now, if you think about it, if you are in the train toilet, you can’t see the sign, if you can see the sign, you are likely on the platform, so are you not to use the station toilets when trains arrive?

Just after the station, the harbour is as empty as was Harrington, and it has equally filled up a couple of hours later 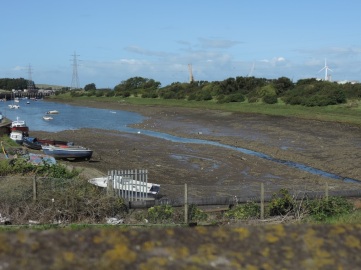 The path does get a little confusing here , and I take a detour down the far arm of the harbour, but when I see the Derwent which flows next to it, I consult my map and realise it is a no go, still it is worth it to see the river 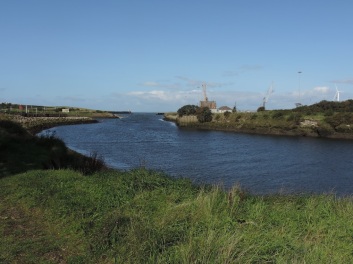 and the path now leads me past Workington Town Rugby League Club, at which point I go all Eddie Waring, and start thinking “Hull Kingston Rovers”, “up and under” & “he’s in for an early bath”. Nobody under 50 will understand any of that , so I will move on.

I cross the Derwent over a new bridge opened by Princess Anne in 2012, after the 2009 floods which left parts of Cumbria under 8 feet of water, many of the bridges were destroyed and it left the town cut in two.

After the bridge the path stays stubbornly inland, passing  within reach of the main Asda as evidenced by abandoned shopping trollies, and finally after walking through a wind farm (another wrong turn, I have to double back) I get to the sea once more.

Those wind turbines are big mind you, and noisy.

Maryport is just up ahead

However, my knee gives in and as I am at Flimby and there is a tempting ice cream shop, I decide to end the walk here with a Sticky Toffee Pudding and Double Jersey Cone. Then as Eddie Waring would say, it’s time to go home for an early bath. 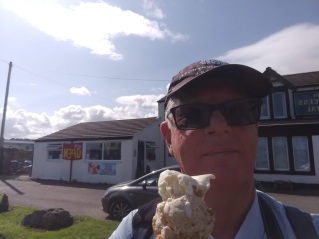 Only as there aren’t any trains running through Bolton, that early bath isnt quite so early….

That dreaded phrase replacement bus service hits me as I near Manchester.

Copyright Allan Russell 2018 except where indicated.